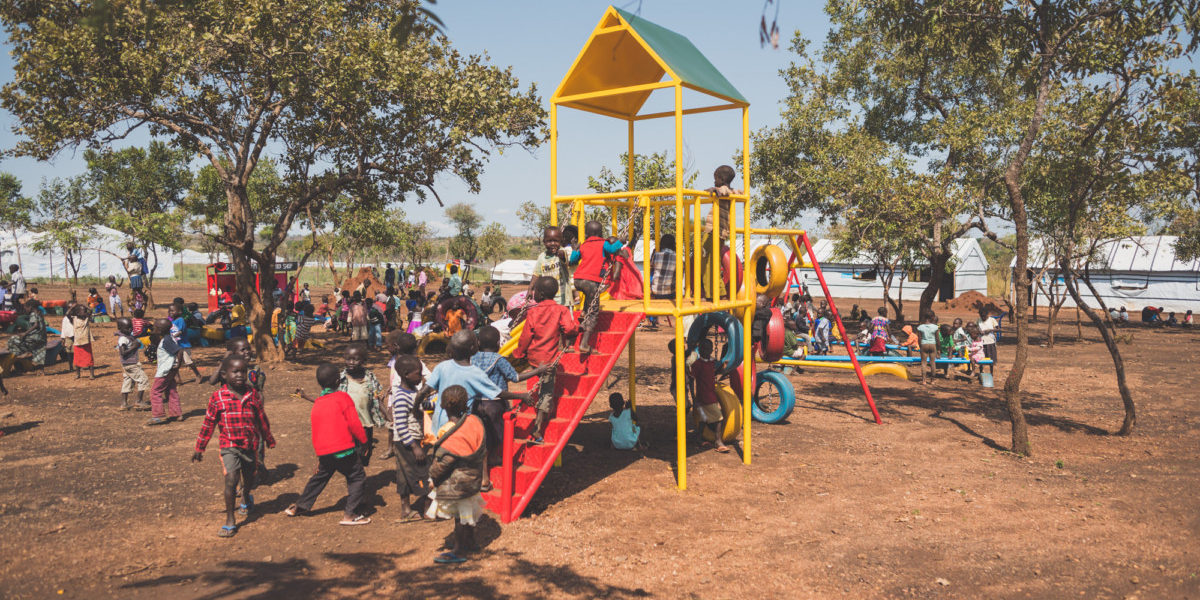 Play Action International / ABOUT US / History

Play Action International was founded in 2009 as East African Playgrounds, which remains the name of our sister organisation in Uganda.

We were founded on the fervent desire for children to have access to their right to play. Though children play across the world, the number of spaces dedicated solely to play varies enormously from country to country. After spending time in East Africa and noticing these disparities and the impact that lack of play was having on children and communities there, founders Tom and Carla constructed the very first playground at Walakuba West Primary School in Uganda.

As building work began, it became clear that as well as a need for playgrounds, there was also a need for apprenticeship opportunities and training programmes to help young people get into employment. The two needs combined perfectly, and so East African Playgrounds was formed.

During the construction of the first playground, there was a lot of intrigue around what was being built. NGOs and other local schools approached East African Playgrounds to ask them for help in constructing a playground at their centres and schools. As time went by, the demand grew and within no time at all there was a waiting list of 70+ schools and centres. East African Playgrounds was fast becoming the leading playground builder in Uganda.

In 2012, we opened our first workshop in Uganda, enabling increased productivity and quality. The playground designs have evolved with us over the years, with exciting new playground elements always being added to our portfolio. Our playgrounds are super bright and colourful, as well as being tailor made to each community to account for each different type of play and consider the needs, wishes and interests of the community. Simple tyres can be made into elephants, boda-boda’s (motorcycles), helicopters, obstacle courses… the list goes on! Playgrounds really signify the importance of childhood and give children the opportunity to play that they need, so the ways in which we are able to customise our playgrounds to each individual community is really special.

We were formed with the ethic of building high quality playgrounds that are locally made, by local people, built with communities in mind. And these are the foundations we still live by today.

In 2015, an in-depth study was conducted to identify the impact of different playgrounds we had built within communities. The results showed that the playgrounds had vast and long-lasting impacts on the community and children, such as increased attendance at school, better concentration in classroom and reduced anti-social behaviour.

The study also highlighted the unexpected use of the playground by teachers. They were using the playground as a teaching resource, helping the children learn colours, numbers, angles, gravity, forces and cause and effect. Building on this organic use of the playground, the team developed a new programme to run alongside each playground build. The Educational Play programme teaches teachers how to utilise play both inside and outside of the classroom to increase engagement and learning.

As the programmes grew, so did the partnerships, and in August 2016 when the conflict in South Sudan caused an unprecedented number of refugees seeking refuge in neighbouring Uganda, the government and humanitarian sector immediately responded and our organisation was pivotal within the response. With play providing vital psycho-social support to children who have suffered trauma, we went on to develop partnerships with UNICEF, Plan International, World Vision and Save the Children to better respond to this vital need.

Working hard to transform empty patches of land to creative child friendly spaces, and making Early Years Centres fun and exciting places visit, led to us receiving two UK Aid grants which will allow us to build playgrounds in the majority of Early Years Centres in refugee settlements across Uganda.

As we approached our tenth year in 2019, celebrations came as half a million children had been impacted by the work of the organisation. It was time to look at the goal for the next ten years: Ten countries in the next ten years – nothing short of the ambitious nature we have always upheld!

The organisation’s focus is now much wider than constructing playgrounds; we have so many incredible new programmes which allow children their right to play in other ways to positively impact their education, development, and well-being. Our ambitious plans to expand come from a demand for our programmes in places which are not geographically restricted to East Africa. With all of these exciting changes, a name change was obvious. And so, in 2020, East African Playgrounds in the UK was rebranded to Play Action International; reflecting our ambitious scope, the desire to do and the framework in which we will deliver our programmes.

The story continues and we are continually learning and evolving to provide the best possible play opportunities to disadvantaged children. We are proud of our beginnings and we are excited about the future – we look forward to sharing our journey with you.

This site uses cookies to give you a better experience.

Register for our free newsletter to keep up to date with what's going on at Play Action International!